Research shows starting early is a guaranteed way of getting your child ahead of the curve.

Early knowledge of math not only predicts later success in math, but also predicts later reading achievement even better than early reading skills.
– Education Commission of the States

In our Counting Curriculum, the activities are carefully planned to teach key concepts in a particular order. Children learn all the basic counting skills before studying more complicated ideas, such as estimation.

Once your child learns all these skills, he/she practices estimating, thinking analytically, adding mentally, and more.

One-to-one Correspondence: counting each tiger only once

One-to-one Correspondence refers to counting each object once and only once. This avoids counting the same object three or four times. Children who don’t develop this skill will think there are more objects in front of them than are actually present.

Number constancy is the idea that re-arranging or scattering a group of items doesn’t change the total number of objects in the group.

Subitizing refers to the ability to instantly count a group of objects. For example, being able to immediately count the number of dots on dice shows subitizing ability. This is important for advanced grouping.

Cardinality: the last number counted equals the number of dogs

Cardinality is the idea that the last number you counted is the same as the number of objects in a group. Cardinality is important for connecting a number with a physical group of objects and then making sense of that knowledge.

Number sequencing refers to understanding the sequential order of numbers. This is essential for addition, subtraction, and functionally any basic application of math.

The Sight Words Math program works best with children ages 3 through 5. It’s intended for bridging the gap between early childhood and kindergarten. The curriculum has around 40 games designed to teach children each of the five fundamental math concepts (outlined above) and a few more advanced concepts. 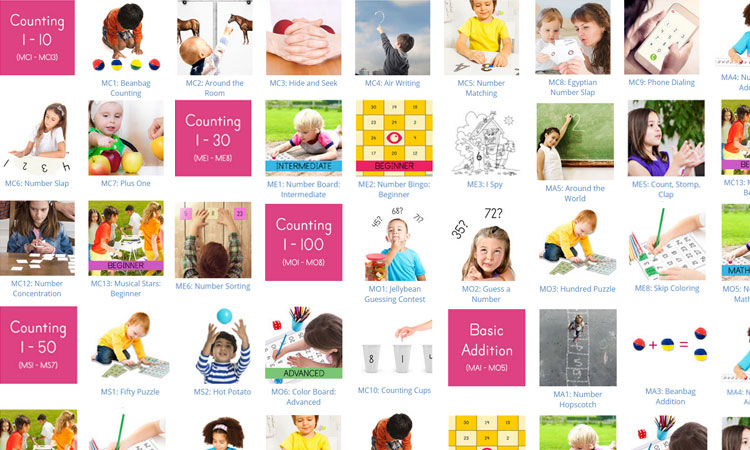 To get the most out of the curriculum, follow a pattern of repetition where you play two different games (one old and one new) every day. Establish a habit where you can set aside at least 15-20 minutes a day to play math games with your child. Continued practice is the best way to prepare your child for excellence.

A focus on active learning, with several hands-on activities, encourages students to learn by doing. Children develop analytical skills as they react to problems and create their own solutions. Since a child’s early years spell out the course of their future psychological development, tapping their potential early is a guaranteed way to help your child succeed.

Here are a few examples of the research that has been done on this subject:

One Response to “Counting Overview”