Count and compare the sounds (phonemes) in two spoken words containing two to four sounds. By judging the number of sounds correctly, a child can “hop” across the lily pads to the other side of the pond. 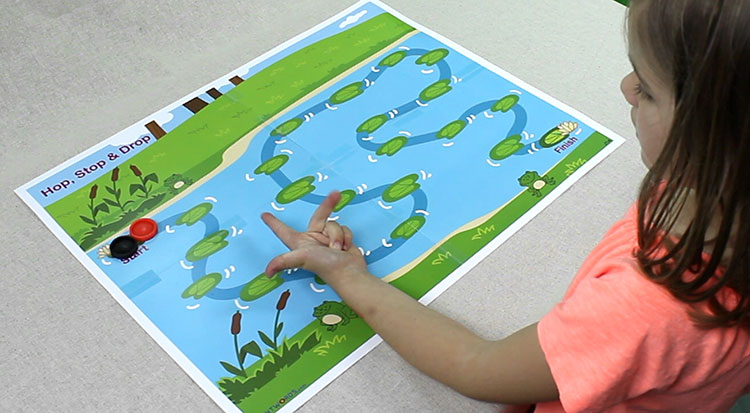 Shuffle the cards and place them in a face-down stack next to the game board. For each player, put one game piece on the first (“Start”) lily pad.

For each card, the adult will say the first word, and the child must say and count the individual sounds (phonemes) in the word. Then the adult will say the second word on the card, and the child will count the sounds in that word and decide which word has more sounds or whether the words have the same number of sounds. For the adult’s reference: the first word on every card has three sounds. The second word will be a similar word with two, three, or four sounds.

If the child correctly answers that one word is longer than the other, she moves her game piece and “hops” forward to the next lily pad on the path across the pond. If she answers incorrectly, she “drops” backward to the previous lily pad. If she says (correctly) that the two words have the same number of sounds, she “stops,” or stays put, on the same lily pad.

To start the game, have the child pick a card from the stack and hand it to the adult to read. The child does not need to look at the card herself.

For the next two cards, intentionally select one where the second word has just two sounds and one where both words have three sounds. This way the child will see what the different possibilities are. After that introduction, select cards randomly from the shuffled stack. Place the used cards in a discard pile.

Continue until the child successfully gets her game piece to the “Finish” lily pad. Alternately, play until she has gone through about 20 word cards or loses interest.

Once the child has mastered the original version of the game, you can vary the order in which you present the two words to the child. This is more difficult, because the first word may have anywhere from two to four sounds (phonemes).

Lesson Objective: Children will hear and count the number of sounds in each of two one-syllable spoken words containing three to five phonemes, comparing them to determine which word has more phonemes.

Divide the group into two teams, with one game piece per team. Fan out the cards, keeping them face down. Have a member of Team A pick a card and hand it to the adult. The adult then presents the word pair on that card to Team B. If Team B answers correctly, it gets to “hop” forward on the board. If not, then Team A gets a chance to give the correct answer and “hop” to the next lily pad.

Alternate between teams in this manner until one team reaches the last lily pad. If you run out of cards before the game ends, just reshuffle and reuse the cards in the discard pile.

Reinforcement: Play the game as you would Mother, May I? (outdoors, if possible). Give each child a turn to hear a word. The child will count the sounds. If he is correct, tell the child to hop, jump, or tip-toe that many steps. This could also be done as teams where one member of a team is called on to answer and the whole team gets to move (or not) based on the child’s answer.