Blend the first part of a spoken word together with the final phoneme (sound), with and without picture cards as visual clues.

This game introduces the skill of paying attention to an individual final sound within a word. It also uses letter cards to reinforce the idea that lower-case letters are what certain sounds look like when we write them. 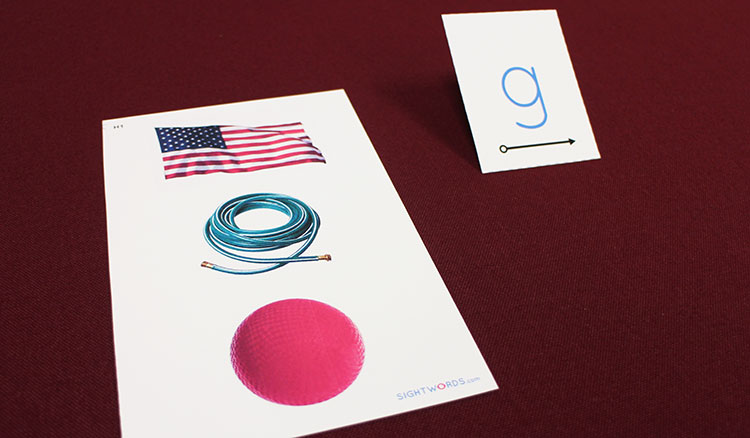 Print out the picture cards and sound cards, preferably on sturdy card-stock paper, and cut them apart. The word index and the list of ending sounds are for the adult’s reference only.

Adults should review the proper pronunciation of the letter sounds before playing this game.

NOTE: When working with a stop sound (a.k.a. “quick and quiet” sound), like /b/, you may need to say the sound a few times to make sure the child hears you, like “/b/ /b/ /b/.” But when the child responds, she should just say the sound once.

Video: How to play Finish the Word

In each session of this game, you will go through the pictures for three different ending sounds. Prop up the three sound cards so that your child is looking straight at them. Lean them against blocks so that they are angled appropriately. Have the child point to each of the sound cards and say the correct sound.

Adult: Remember what sound each of these written sounds makes?
Point to each one and tell me its sound.
Child: /g/, /rrr/, /k/.

Part A: With Pictures

Adult: [showing picture card] Look at these pictures.
They show flag, hose, and ball.
Now you name each picture as I point to it.
Child: Flag. Hose. Ball.
Adult: Good.

Now place the first picture card underneath or to the left of the sound cards, which should remain propped up so the child is looking directly at them while doing this activity.

Adult: Now I’m going to put a card with three pictures next to the sound cards.
Then I’ll say a word in two parts.
I’ll start with the first part of the word and then I’ll say the last sound.
You listen, point to the sound card for the last sound, and tell me the word.
The word is the same as one of these pictures.
Let’s do one. Listen: fla • • g. Fla • • g-g-g.
What’s the word?
Child: Flag!
Adult: Yes! Now point to the /g/ card and say its sound.
Child: [pointing to sound card] /g/
Adult: Good job.

Be sure to enunciate the target words very clearly, emphasizing the ending sound.

Part B: Without Pictures

After going through all the words for those three ending sounds with the picture cards, go through the same words without the picture cards. This makes the activity just a bit harder for the child. Keep all three sound cards in front of your child.

NOTE: Do not show the d sound card when going through the d pictures, unless your child is to the point of always recognizing lower-case b correctly. Because the letters b and d look so similar, young children can be easily confused and have lots of trouble telling the two letters apart. So for now we will show only the b sound card and focus on teaching the child to hear the difference between /b/ and /d/.

You will do this activity with your child several times in order to familiarize the child with hearing all the different consonant ending sounds. Cover three sounds (phonemes) per daily lesson.

If the child struggles, slow down the pace and go through just two letter sounds per session instead of three.

Using the same cards from the activity above, show the child the target word on the first card and say:

Adult: Do you remember what we called this a picture of?
Child: A flag!
Adult: Yes, flag.
This time I will point to the picture and say its first part.
Then I want you to say the last sound in the word,
and finish up by saying the whole word.
Get ready to say the last sound and finish up my word:
flag. Fla…
Child: /g/. Flag.
Adult: Yes! Now try to finish some more of my words.

Point to another card with a picture that ends with /g/ and repeat this process. Have the child touch the corresponding sound card (g) and picture (e.g., dog) after finishing each word.

Prop up the three letter sound cards where all the children can see them. If they have their own cards, they can point to each card and say the corresponding phoneme. Review the picture card names. Play the game as a group, asking the children to respond together. Give each child several opportunities to respond.

When they are ready, play the game without picture cards. Place the letter sound cards where everyone can see them. Go through the word list again, asking each child to respond by saying the whole word and then choosing and saying the correct ending sound.

Reinforcement: Give each child several sound cards. Place several picture cards where everyone can see them. Let the children take turns placing the letter sound card to the right of the picture that corresponds to the picture’s ending sound. For example, a child places the g card to the right of the flag picture. Have the child say the whole word.