B8: Can You Make a Rhyming Word?

Produce the second of a pair of one-syllable rhyming words to insert in a song. This game introduces your child to the skill of coming up with a rhyming word on his own, without any contextual clues. 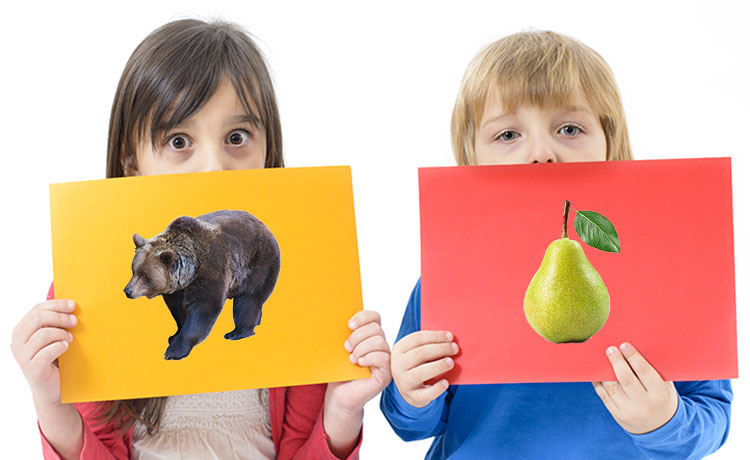 “Bear and pear are rhyming words!”

Video: How to play Can You Make a Rhyming Word?

Explain to the child that you have a song to sing that needs rhyming words to finish the lyrics. This song is sung to the tune of “London Bridge Is Falling Down” (click here for the tune). Sing the song for your child, and then ask her to sing with you, using the rhyming pair inserted in the lyrics below.

Then ask her to help you with the next verse:

Do several more verses, with you providing the first word and the child completing the rhyme pair.

NOTE: It is perfectly okay if she comes up with a rhyming word that is not a real word (such as gat to rhyme with hat). Right now we are just focusing on the concept of rhyming and how rhyming words sound similar. Just mention that it’s not a real word, and move on:

Adult: Yes, that rhymes. Gat isn’t a real word, but it does rhyme with hat.
Let’s put it in our song…

Here are some groups of one-syllable rhyming words that can be used for this activity. (There are many more besides these!)

If your child has trouble coming up with a rhyming word, verbally make some suggestions that might make a rhyming word. Clearly enunciate and emphasize the rhyming parts of the words (e.g., lake, rock).

Have the child produce both words of a rhyming pair, and then you can both sing the song again with your child’s words inserted. Coming up with a rhyming pair from scratch is significantly more difficult than thinking of one word that rhymes with a provided word.

Lesson Objective: Children will be able to create pairs of rhyming words without visual or verbal context clues.

Tell the children that they will be whisper-singing rhymes (singing softly). Have them practice by saying “hello” to each other while whispering. Then follow the directions for singing the rhyming song. Encourage the children to try to come up with more than one rhyme for each word.

Reinforcement: Use new words from the word list above. Repeat the activity by changing the tune you sing. This pair of songs works well:

“If You’re Happy and You Know It” — Once the child has helped you come up with a pair of rhyming words, put those words into this song.

If the two words do not rhyme, the children should not clap their hands.

Increase the difficulty by having the child who is called on give both words of the rhyming pair.