B3: Catch the Match

Play a board game with your child, in which he will have to match one of his picture cards to a picture on the board representing the rhyming word. This is a fun way for him to practice finding the rhyming pair among a group of words. 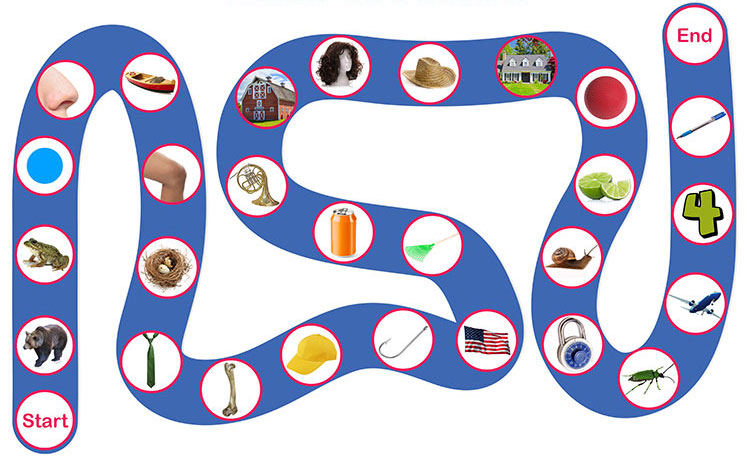 B3: Catch the Match

NOTE: You may choose to cut out each individual picture card if you are only going to play the game with one child. However, using 27 individual cards instead of three sets of 9 connected pictures makes the game move very slowly. Children may lose interest. We recommend against doing it.

Option: Use a spinner or dice to allow the child to move more spaces and shorten the lesson.

Print out, trim, and then tape together the four pages that make up the game board. Print the three pages of the picture cards. DO NOT cut out the individual pictures on the cards.

Video: How to play Catch the Match

Put the game board and cards in front of your child and identify all of the pictures for him, to be sure you both use the correct word for each image (e.g., cat and not kitty). The printed word lists are there only to make sure you use the correct words, NOT to show the child. Do not show the word list to the child, as he is not ready for written words yet.

Spread out the set of three pages of picture cards, face up, near the game board, and put the game pieces (one per player) in the START circle. The child flips the coin and moves forward either 1 or 2 spaces, depending on how the coin lands. Have him identify the picture on that space. Then he must look among the three pages of picture cards for one that rhymes with the one on the game board.

Adult: Alright, you got a 2, so move your game piece 2 spaces.
What’s the picture on that space?
Child: A hat!
Adult: Look at the cards. Do you see any pictures that rhyme with hat?
Child: Um…the fan?
Adult: Not quite. Listen: haaat…faaannn.
Listen again: haaaat…faaaannn. Do they sound the same at the end?
Child: Um…no.
Adult: Look at the cards again.
What do you see that rhymes with hat? [Emphasize /t/ sound.]
Child: Cat!
Adult: You think it’s cat? Well, say the two words together.
Child: Hat, cat. Yes, they rhyme!
Adult: Very good, hat and cat do rhyme!
Now it’s my turn. What picture did I land on?
Child: A frog.
Adult: Can you help me find a picture that rhymes with frog?

Then you can finish out your turn with your child “helping” you, or even correcting you! (Kids love pointing out when grown-ups make mistakes.)

If he makes a match, he should say both words out loud. If he can’t find a rhyming card, he moves his game piece back to where it was before and his turn ends. When you take your turn, ask your child to help you identify the pictures and find the rhymes. Continue until both of you reach the end of the board game path.

Instead of using the set of picture cards, have the child try to generate his own rhyming word to match the board picture he lands on.

Lesson Objective: Children will be able to identify and match pictures that rhyme.

GELDS (Georgia Early Learning & Development Standards): CLL6.3b (Activities for this standard will be increased in difficulty to match the children’s age group.)

Divide the group into sets of two or three children. Give each group a game board and a set of three cards with pictures. When a child in the group lands on a picture on the game board, he points to and names the corresponding rhyming picture in the set of pictures.

Play the game over several days. Mark the picture on each group’s game board that should be the group’s starting point the next day.

There are lots of ways to speed up the game. They include using dice, using spinners, and making 3×5” cards with numbers from one to six for children to select to determine how many spaces they can move. Another option is to use the material described in the main lesson that limits a player’s movement to a maximum of two spaces, but you purposely use only half the game board. Reduce the number of pictures for children by using the CONFIDENCE BUILDER in the main activity.

Reinforcement: Continue playing the game in your small group. Reverse the direction of the game by starting at the end and ending at the start.