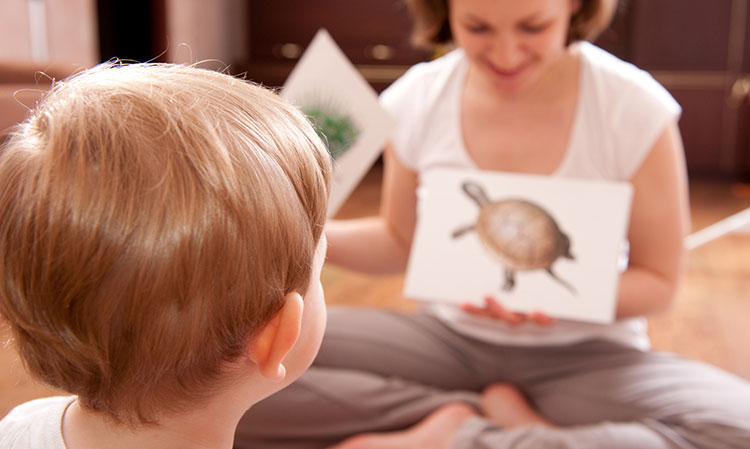 Print out the animal picture cards and cut them apart. Tape the four animal cards from the first page, with names that contain different numbers of syllables — moose (1 syllable), panda (2), kangaroo (3), alligator (4) — to the ends of the four boxes (one picture for each box). Place the other picture cards in a stack, face down.

Video: How to play Animal Sorting

Before you start the game, have your child identify the picture on the end of each box, count out the syllables, and figure out how many syllables are in each animal’s name. He can determine this by using his two fingers under his chin to feel the syllables, or he can clap them out.

To start the game, tell your child to pick a picture card from the stack. Tell him the name of the picture, then have him repeat the name and count out the syllables. Once he knows how many syllables there are, he must decide which animal’s box to put it in.

You can give your child a boost by helping him say the words, very clearly and slowly, giving equal weight to every single syllable.

Add dots (one for each syllable) to the box labels in addition to the animal pictures. Your child might find it a little easier to count the dots than to count the syllables in each animal’s name, while also counting syllables in the names of the animals on the other picture cards.

When your child is very comfortable with the game, encourage him to determine the number of syllables without clapping or even saying the word out loud, just “hearing” the word in his head. This is hard!

Once your child has mastered the counting and sorting of shorter words, move on to longer words with up to five syllables (e.g., refrigerator, Tyrannosaurus). There is no need to go beyond five-syllable words. If the child is frustrated by the five-syllable words, stop and move on to the next activity.

NOTE: Five syllables are the maximum for children who are not yet in first grade. If he has mastered four-syllable words, it’s appropriate to move on to the next activity.

NOTE: If your child is having trouble with words containing more than three syllables, you can modify the material in the next activity (Syllable Softball) and return to its original design at a later time.

Use a collection of household objects or toys — e.g., teddy-bear (treat as one 3-syllable word), fork, scissors, sunglasses — instead of the picture cards.

Let your child work out some fidgety energy and make a little noise. Instead of sorting cards into boxes, have him count out the syllables by beating a drum or dropping a coin or marble into a jar.

Punch two holes in the four animal cards from the first page of cards, and attach a length of yarn or string to each. Each child will “wear” a card around their neck representing a 1-4 syllable animal name. Help each child count the syllables in the animal name on his card. Then hold up another picture card. Say the word and count the syllables. Who wins this card? The child who has the picture card with the same number of syllables gets to hold the card.

Reinforcement: Have the children switch their cards, getting an animal card with a different number of syllables.