Beat a drum for each syllable in a word or name. This is your child’s introduction to the idea that words with different numbers of syllables can be analyzed and broken into parts. She will feel the vibrations from the drum as she hears the syllables, but this is more difficult than feeling her chin move with each syllable.

In words with multiple syllables, some of the individual syllables have no meaning, so your child may never have noticed them before. For example: in the two-syllable word marching, the -ing syllable has no meaning on its own. This activity will teach your child to divide words into syllables by hearing and feeling the rhythmic speech segments of words.

Syllables are the “natural perforations in words,” the places where words easily come apart. 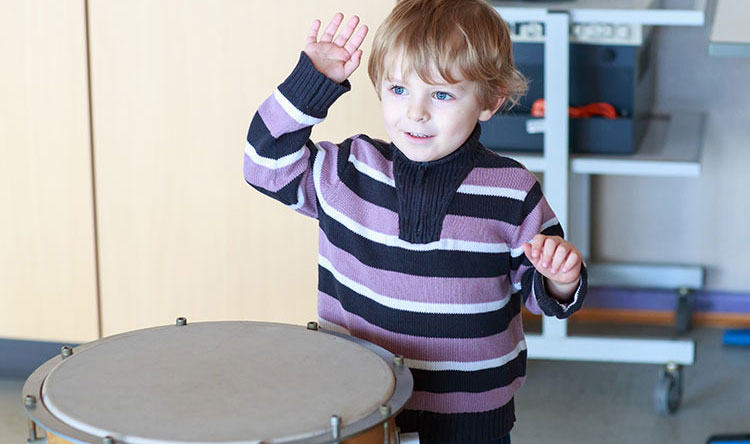 You may want to have two drums, so you can have your own to demonstrate with.

Video: How to play Drumming Names

Explain to your child what a syllable is. It is one part of a word. Some words have only one part and other words have more than one part. Pronounce these words very clearly, giving equal weight to each syllable.

Now show your child how to drum the syllables in a variety of familiar words and names. Print out our word list for examples of words of different lengths. Use names of people and characters that are very familiar to the child: family, pets, friends, and favorite fictional characters. Make sure you use names of varying syllable lengths: e.g., Jeff, Fido, Granny, Elizabeth, Uncle Julio, etc.

Adult: I am going to say a name, and I am going to hit the drum
for each part, each syllable, of the name.
You tell me how many parts you hear.
Listen. Mom-my. Mom-my.
[Say name clearly. Say it again, clearly, while drumming syllables.]
Adult: Say it with me…
Child and Adult: Mom-my.
Adult: How many times did you feel your chin drop
when you said Mom-my?
Child: Two!
Adult: Yes. Mommy is a word that has two parts, two syllables.
Now you take the drum, and we can
count the parts in another word…

Once your child grasps the concept, have her say each word with you and drum with you. Eventually she should be able to hear and drum the syllables on her own.

Stick with this activity until the child has mastered the skill of hearing the difference between one- and two-syllable words and names. This is a critical step toward a child’s ability to hear the individual sounds in words later on.

NOTE: For any error the child makes, have her repeat the use of her fingers under her chin and feel the number of syllables while she repeats the word. Then have her drum the word again.

The adult should model holding two fingers parallel to and touching under the chin while saying the word. Then help the child hold her fingers under her own chin. It is important that the child feel her chin drop when uttering each syllable.

Have your child clap out the syllables in longer names with four or five syllables. Examples: Aunt Elizabeth, Dora the Explorer, Tyrannosaurus Rex. Stick with names that are very familiar to your child.

We adults know that each of these names are multiple words, but to children they are just one name, so you can use them to teach your child to count the syllables.

Let the child sit or stand and stomp out the number of syllables she hears with her feet.

Lesson Objective: Using a vibrating surface such as a drum, children will hear a word and repeat it while rhythmically beating out and then correctly counting its syllables.

Tap out the name of each child in the group, using small drumsticks or finger tapping quietly on the table or hard surface. The best vibrations come from tapping a solid object against an empty or hollow container such as an empty plastic water bottle or an empty peanut can with a plastic top. Have each child tap his own name.

Repeat the activity, asking how many beats each name has. Add words from the word list. Continue this activity until the children master the skill of hearing the difference between one- and two-syllable words.

Reinforcement: Tap the last name of each child in the group. Whose name has the most beats? Whose name is the shortest? Which names have the same number of beats? Tap first and last names together. Let the children tap each other’s names.