Feel how your mouth moves with each syllable of a word. This is your child’s introduction to the concept of syllables and how words can be analyzed and broken into parts.

In words with multiple syllables, some of the individual syllables have no meaning, so your child has probably never noticed them before. For example: in the two-syllable word marching, the -ing syllable has no meaning on its own. This activity will teach your child to divide words into the rhythmic speech segments known as syllables.

Syllables are the “natural perforations in words,” the places where words easily come apart.

We will begin this section by focusing on compound words, where each syllable has a meaning on its own. For example, starfish is made up of the words/syllables star and fish. This will ease the child into the concept of syllables. 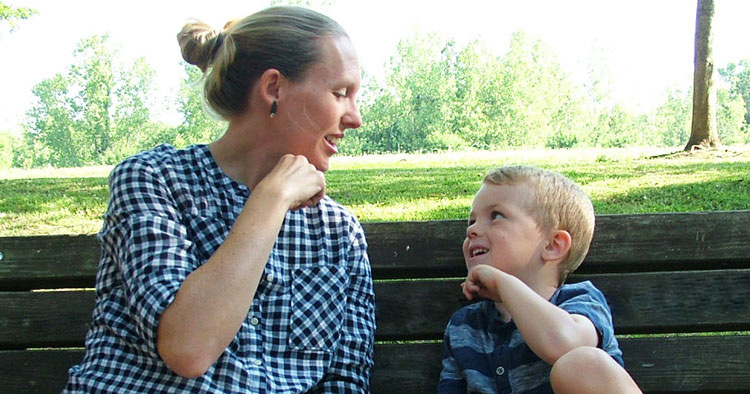 Hold two fingers underneath your chin as you speak to show your child the best technique for feeling the syllables in words.

Explain to your child what a syllable is. It is one part of a word. Pronounce these words slowly and very clearly, giving equal weight to each syllable.

Video: How to play Feeling Syllables

You will model holding two fingers parallel to and touching under your chin while slowly saying the word. Then help the child hold her fingers firmly under her own chin. It is important that the child feel her chin move when uttering each syllable.

Now have the child join you in saying some compound words and feeling how her chin moves with each syllable.

Stick with this activity until the child has firmly mastered this skill. This is a tremendously valuable technique that will be useful throughout preschool and beyond.

If the child has difficulty counting her chin drops, have her put her whole fist under the tip of her chin and you count aloud each time her chin drops. Then, have her repeat the word after you and have her try to count the number of times she feels her chin drop. Some children find it easier to use their fist instead of their fingers to feel the syllables in words they say.

This game can be played anywhere, as it doesn’t require any picture cards or props. Help your child practice feeling syllables while you are waiting in line, in the car, etc.

Lesson Objective: Children will feel and correctly count the number of syllables in a spoken word by holding together their index and middle fingers of one hand firmly under their chin while orally repeating the word.

Reinforcement: “Look around the classroom. Let’s find new words to “feel” and count the syllables.”

Q: My child has cerebral palsy and can’t hold her fingers straight. How can she do this activity?
A: If your child can’t feel the chin movements with her fingers, she can use another body part — the back of her hand, her wrist, or her forearm — so long as she can hold it firmly under her chin to feel how her jaw moves with each syllable.