Count the syllables in words to move around the bases of the softball diamond. Each syllable represents one “base.” 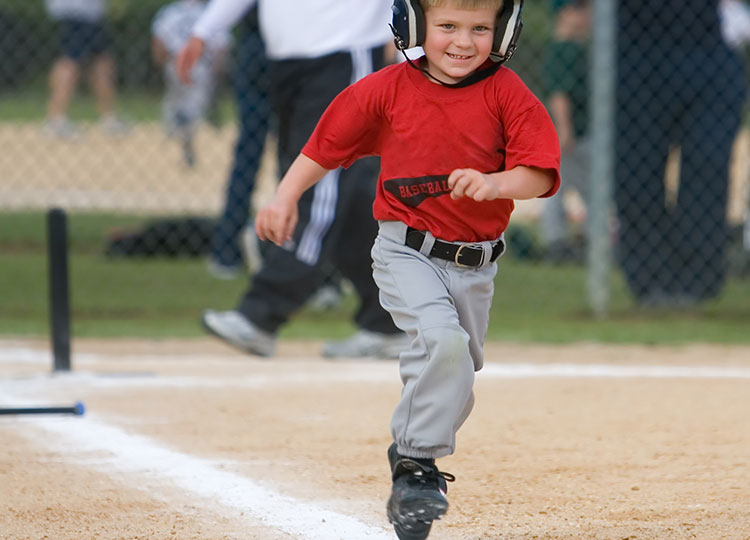 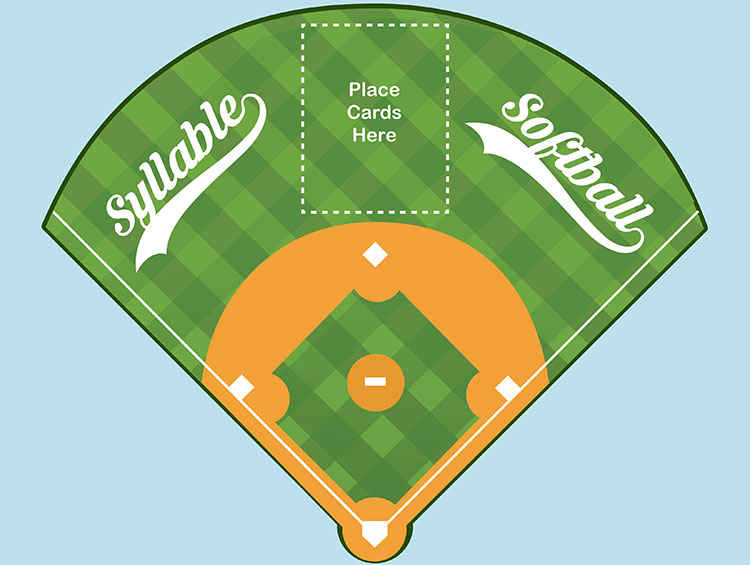 If you are playing a “life-size” game, find something to serve as “bases” and arrange them on the ground as in a softball diamond.

If you are playing a small-scale game, print out our softball game board on sturdy card-stock paper. Trim off the white edges and tape the sheets together. You will also need some game pieces, one for each player.

Print out the picture cards, preferably on sturdy card-stock paper. Then cut them out, shuffle them, and put them in a face-down stack. Use the included word list to make sure you and your child are using the correct word for each picture.

Video: How to play Syllable Softball

Set up the softball field (either the large or small version) and put the child (or her game piece) at home plate. Tell her to pick a picture card from the stack and turn it face up. You identify the picture and have her repeat its name. Then, have her say the picture name as she divides it into syllables.

Adult: Okay, pick a card from the stack.
It’s a picture of a computer! What is it a picture of?
Child: Computer!
Adult: Now say it in parts and hold up a finger for each part you say.
Watch me: com – pu – ter. [hold up finger for each syllable]
Now you do it: computer.
Child: Com – pu – ter, one, two, three … three!
Adult: Good job! Now go to third base while you
say the syllables in computer.
Child: Com [1st base] … pu [2nd base] … ter [3rd base].

If the child answers correctly and moves to the appropriate base, then she can take another turn by picking a new picture card.

If the child gives an incorrect answer, she gets an out. You can serve as the opposing player and take your turn after she gets out. Keep the child involved by asking her to “help” you with your turn.

Adult: My turn: panda!
Can you help me count the syllables in panda?
Count with your fingers while I say the word: pan – da …

After one or two plays the adult should give an incorrect answer (children love catching grown-ups’ mistakes!), and then it becomes the child’s turn again.

NOTE: As in real softball, once a “runner” crosses home plate, she stops running and does not run toward first base again. So if your child is on third base and correctly identifies a two-syllable word, she runs home and scores a point but does not run to first base. Instead she stops at home plate to get a new word.

The child can also play against herself. Challenge her to see how many “runs” she can score before she gets an out.

Lesson Objective: Using a game board or simulated softball diamond, children will score hits and runs by naming a pictured item on a game card, orally dividing the pictured word into syllables, and correctly counting the number of syllables in the word.

Play a practice game first, demonstrating how players get hits and move to the bases. Let the children decide on a name for their team (e.g., Braves vs. Astros). Two children will be the team managers. The managers draw the cards for their players and say the word. The players respond with the number of syllables and move their game piece (teams may have one to three players).

Play the game for several days and keep track of how many wins each team has.