Compare two sounds (phonemes) in a pair of words, and practice matching the sounds to their alphabet letters. Your child will search for matches in the beginning sounds, ending sounds, and middle sounds of two words.

This activity is similar to Snatch a Match, but also incorporates the word work mat from Sneak Preview of Reading to reinforce the connection between the letters and their sounds in words. 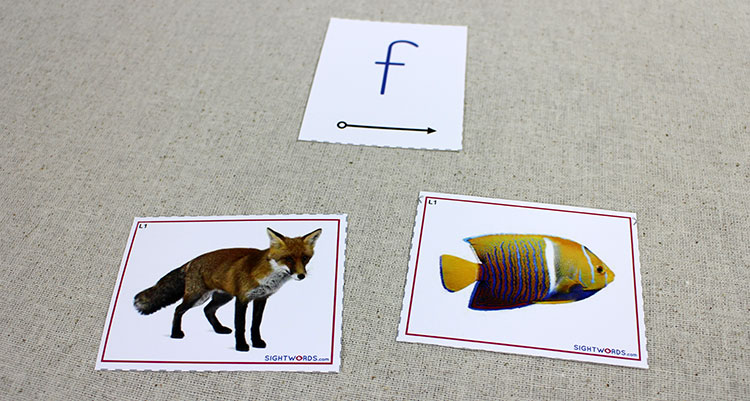 Warm-Up: Put the word work mat directly in front of your child. Before starting the game, point randomly at different letters and digraphs and review them, flashcard style, to be sure he remembers the letters and their sounds. Have him say both the names and the sounds of the vowels.

Video: How to play Mat Match

Using the word index, go through the picture cards with your child to be sure he is using the correct word for each picture (e.g., cab instead of taxi). Then shuffle the picture cards and divide them into two face-down stacks. In this activity we will not be using the three-square grid at the bottom of the word work mat, so you can put the picture card stacks on that space.

Introduce the game to your child by explaining that it is similar to Snatch a Match.

Adult: I’m going to show you a new game that is a little like Snatch a Match.
You turn over the top picture in each pile, and I’ll name the pictures.
Then you tell me if the sounds I ask you for — the first,
the last, or the middle sounds — in the two pictures match.
Next, I want you to look at the mat and find the letter for each sound
I asked you to try to match in the two words.
If the two sounds match, you’ll touch that letter on the mat twice.
If the sounds don’t match, you’ll touch two different letters on the mat.
That’s a lot to remember, so we’ll practice together.

Now lead your child through a round of the game. For each round, you will randomly select which sound (beginning, ending, or middle) the child should identify to look for a match. Be sure to say the words very clearly.

Non-matching cards can be put in a “used” pile off to the side. When you get to the bottom of the face-down stacks, shuffle the used cards and divide them into two new face-down stacks.

The six cards with our SightWords.com eye logo are wild cards. If your child turns over a picture card and a wild card, he can count them as a matched pair (after identifying the designated sound for the picture card). Or you can leave the wild cards out if you like.

Go through at least 15 pairs of picture cards in a session. Be sure to mix it up, randomly asking your child to match the beginning, ending, and middle sounds.

Play this game often over a period of at least two weeks. Revisit this game until he is confident in determining if the two target sounds match and can quickly identify the corresponding letters on the mat.

Have the child look only for matches in the beginning sounds. Once he is confident in that, switch to ending sound matches, then digraph matches (e.g., chin and chop), and eventually middle sound matches. The final step is to vary which sounds (beginning, ending, or middle) he must match.

Georgia Standards of Excellence: ELAGSEKRF2.e
Most Kindergarteners will find this skill very challenging.

Review all the letter sounds by pointing to each letter and having the children say the sounds with you. Place two stacks of picture cards on the table. Have the children take turns selecting two cards. Remember to explain the wild cards and what they look like. If the cards are a match, in terms of their specified initial, medial, or final sounds, the child keeps the cards. The child must match the specified sound of each card to its corresponding lower-case letter. If no match is made, the cards go back into the stacks.

This game can be played in teams where one child on the team says each specified sound in the pictured item and the other child identifies the corresponding letter card(s). If the opposing team thinks that the team has made an error, it can challenge and get the matched card set if a match occurs.

Reinforcement: At the end of each round, have the children place their “matches” together. Review each match by saying the sounds together.