Compare two short words, identify the vowel sound in each, and decide whether the two vowel sounds match.

Although this activity focuses on vowel sounds, it is also a good opportunity to review beginning sounds and ending sounds (the consonant sounds). 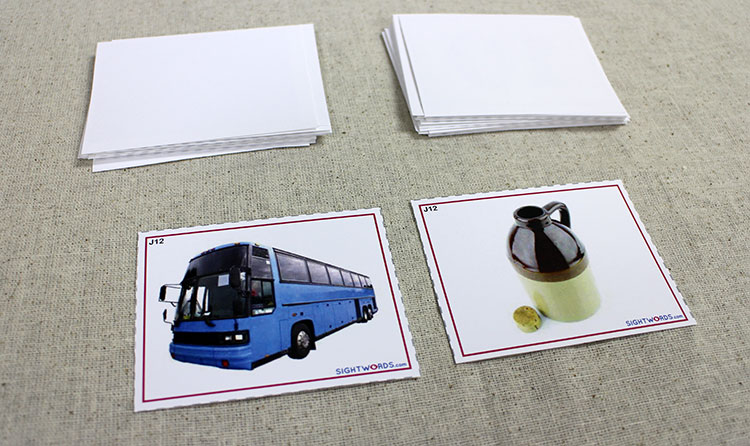 Before starting the game, go through the picture cards with your child to be sure she is using the correct word for each picture (e.g., cab instead of taxi).

Lay out the sound cards in a line in front of the child (in alphabetical order from left to right). Do a quick review of the short vowel sounds by singing Part 2 of the Bingo Vowel Song.

Display the Egbert picture as a visual reference for the child while she is playing the game. Remind her who Egbert is, “aaan eeegg iiin ooodd uuunderpants.”

NOTE: As you say the vowel sounds in this activity, pronounce them carefully and stretch them out. Children particularly have trouble learning to hear the difference between /eee/ and /iii/.

Video: How to play Snatch a Match

With the vowel sound cards laid out in front of the child, shuffle the picture cards and divide them into two face-down stacks.

Non-matching cards can be put in a “used” pile off to the side. When you get to the bottom of the face-down stacks, shuffle the used cards and divide them into two face-down stacks to be re-used.

Adult: Now turn over the next two cards. What are the pictures?
Child: ham and map
Adult: Do they have the same smart letter sound in the middle?
Say the words again, slowly.
Child: haaam, maaap … yes, they’re the same!
Adult: What’s the smart letter sound in ham and map?
Say it and point to the sound card.
Child: /aaa/ [points to a card]
Adult: Yes, /aaa/. So you have a match!
You get to hold onto the matched pictures.
When we play the game, if you think the two pictures
have the same smart letter sound in the middle, say “Snatch a Match!”
Then tell me the matching sound and point to its sound card.
If you’re right, you get to keep the two cards.
If you’re wrong, you put the cards in the used pile.

The four cards with our SightWords.com eye logo are wild cards. If your child turns over a picture card and a wild card, she can count them as a matched pair (after identifying the middle vowel sound for the picture card). Or you can leave the wild cards out if you like.

Go through at least 20 pairs of picture cards in a session. Make sure that the cards you use include examples of all five vowels.

Reduce the number of vowels in the picture card set to just two or three. Put out only the vowel sound cards that are in that edited picture set.

The primary purpose of this game is to find matching vowel sounds, but you can also encourage the child to look for matching beginning sounds or ending sounds.