Use a popular children’s song (“Bingo”) and a funny picture to help your child remember the short vowel sounds. This will reinforce what your child learned in the previous activity. 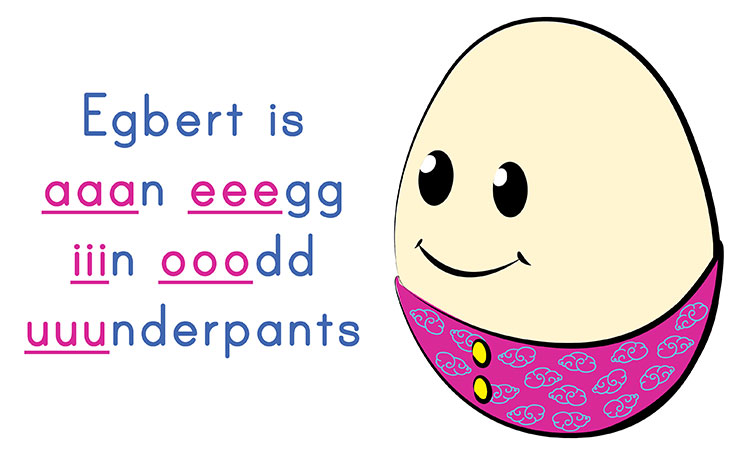 Lay out the vowel sound cards, in order from left to right, in front of your child. Remind him that he learned a song about smart letters (vowels) and their names. Review that first part of the song with him.

Adult: You learned part of the smart letters song a while ago.
Let’s sing it again, and then I’ll teach you the rest of the song!

Lead your child in singing the song. Have him point to each sound card as you both say the vowel’s name.

Now teach your child the next part of the song, which is about the vowel sounds.

Put out the vowel picture cards underneath their respective sound cards. Remind your child of the hand gestures that go with each vowel sound. Then sing the last verse again with those hand gestures.

NOTE: Sing the song until your child has a firm understanding of all five vowel sounds and can match the sounds with the correct letters.

The second reinforcement tool is a funny picture of an egg named Egbert.

This is a great activity to do outside the home or classroom, such as running errands or walking to recess.

Lesson Objective: Using a picture, mnemonic, and a song as aids, children will be able to produce the short vowel sounds that correspond to the five major written vowel letters.