Introduce the short vowel sounds to your child, emphasizing that vowels are “smart letters” because they say their name and a sound. 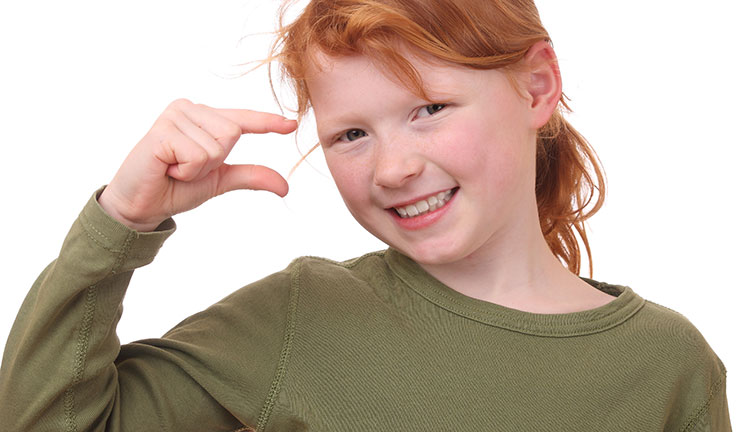 Adult: I’m going to point to these smart letters. When I point, you point to the same letter and tell me its name.

Video: How to play Short Vowel Sounds
First go through the vowels in order, from left (a) to right (u). Then point to the cards randomly, with the child pointing and saying the vowel name every time. Keep reviewing until she can say the correct vowel names immediately and confidently.

For your own reference, watch our video demonstrating the proper pronunciations of the short vowel sounds.

Now you will introduce the short vowel sounds, by reminding your child what she learned earlier about vowels: that they are smart letters that can say their name as well as a sound.

NOTE: As you say the vowel sounds in this activity, pronounce them carefully and stretch them out. Children particularly have trouble learning to hear the difference between /eee/ and /iii/.

Adult: Vowels are smart letters, because they can say their name and a sound. You know the names they can say: ā, ē, ī, ō, ū. Now we’re going to learn the sounds they can say.

Set out the five vowel sound cards, in order, in front of the child. Point to the a card and say:

Adult: This letter says the /aaa/ sound, as in aaapple. Say /aaa/ when I touch under the /aaa/ sound card. Get ready. What sound? Child: /aaa/ Adult: Yes, /aaa/. Whenever you see this sound card, you should say its sound, /aaa/. Here’s a hint to help you remember the sound this letter makes…

Put the /aaa/ picture card (a girl shrugging) underneath the a sound card.

Adult: Nothing bothers the /aaa/ sound. It’s the sound people make when they hold their arms like this picture and say, “Aaa, who cares?” Or, “Aaa, no problem!” Can you hold your hands like the girl in the picture and say /aaa/? Child: /aaa/ [makes gesture]

Adult: The letter e makes a sound like /eee/, as in eeegg. This sound is a little hard of hearing. This picture will help you remember the sound for the letter e. [Put the /eee/ picture card underneath the e sound card.] Hold your hand up to your ear like the picture and say /eee/ when I touch under the sound card. Get ready. Child: /eee/ [makes gesture]

Now point to the i sound card.

Adult: The letter i makes a sound that’s kind of timid and shy: /iii/. You smile, but just a little bit, when you say the /iii/ sound. [Put the /iii/ picture card underneath the i sound card.] Look at this picture. I call it “itty bitty i“: /iii/. You hold your thumb and finger like the girl in the picture and say /iii/ when I touch under the sound card. Get ready. Child: /iii/ [makes gesture]

Adult: The letter o makes the same sound you make when the doctor wants to look inside your mouth: /ooo/. “Open up and say /ooo/.” [Put the /ooo/ picture card underneath the o sound card.] Point your finger toward your mouth like the doctor is pointing the tongue depressor, and say /ooo/ when I touch under the sound card. Get ready. Child: /ooo/ [makes gesture]

Now point to the u sound card.

Adult: Here’s the last vowel sound. The letter u makes the sound /uuu/, as in uuup. [Put the /uuu/ picture card underneath the u sound card.] Look at this picture. Now you make a “thumbs up” sign and say /uuu/ when I touch under the sound card. Get ready. Child: /uuu/ [makes gesture]

Now do a recap of the vowel sounds your child has learned. Leave the picture cards underneath the sound cards.

Adult: Let’s see if you can tell me the sound for each of these smart letters when I touch under the sound card.

Start by reviewing the vowel sounds in order: /aaa/, /eee/, /iii/, /ooo/, and /uuu/. Do this until the child can give the correct sound for each vowel. Then point at the sound cards randomly. Once the child can identify the sounds consistently, turn the picture cards face-down and review the sound cards with her again. If she has trouble with one of the sounds, turn the picture card over to give her a visual clue. It may take several days for a child to master all five short vowel sounds.
↑ Top