IMPORTANT: If the child already knows the NAMES of the vowels, watch the video and then teach the Vowel Names Song about vowel names.

Before starting this lesson, check the Fast Track.

Use a popular children’s song (“Bingo”) to introduce your child to the names of the vowels. You will also teach your child the terms vowel and consonant.

To do the first activities in the Connecting Sounds module, children need a basic introduction to the names of the vowels, which are the same as the “long” vowel sounds. A later activity will introduce the short vowel sounds. 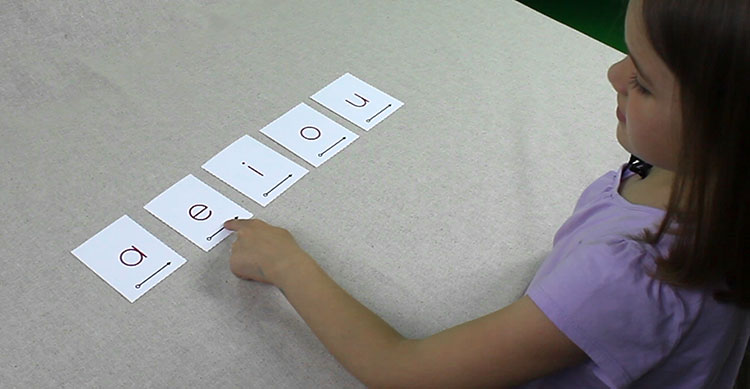 Print out the vowel sound cards, preferably on sturdy card-stock paper, and cut them apart. Print out the song lyrics, but these are for the adult’s reference only. The song is sung to the tune of the children’s song “Bingo.”

Video: How to play Vowel Names

Start by explaining to your child that the letter sounds she has learned so far are called consonants, and she is about to learn some new letters that are called vowels.

Adult: You have learned to recognize a lot of letter sounds.
The letter sounds you’ve learned and seen pictures of
are called consonants. Can you say that word?
Child: Consonants.
Adult: Yes. Consonants are important pieces of words.

Set out the five vowel sound cards, in order, in front of the child.

Adult: There are five more letters in words that I want you to know about.
These letters are called vowels. Can you say vowels?
Child: Vowels.
Adult: Yes. Let’s go through them one at a time and learn their names.

Point to the first sound card, say “A,” and have the child repeat the letter name and point to the card. Do this for each of the vowels. Repeat a few times until she gets familiar with the vowel names.

Now teach the song to your child. Whenever you sing the name of a vowel, point to the appropriate sound card. As the child gets familiar with the song, have her sing with you and point to the sound cards.

Continue practicing the song until the child can sing the first verse on her own and can answer the question, “Why are vowels smart letters?” Be sure to emphasize that these are the names of the letters. (She will learn the vowel sounds — a.k.a. the short vowel sounds — in a later activity.) Review this song until the child can match the vowel names to their correct pictures confidently and quickly.

Sing the song, but omit one of the vowel letters. For example, “A – E –   – O – U.” The child then has to name the missing vowel and point to it. For a greater challenge, omit two of the vowel names.

This is a great activity to do outside the home or classroom, such as running errands or walking to recess.

Lesson Objective: Children will state the names of the five common vowels and match the written lower-case vowels with their spoken names.

Place the vowel cards on the first row of the pocket chart or tape them on a whiteboard or wall. Follow the instructions above to describe consonants and introduce vowel names. Point to each card, say the name of the vowel, and have the children repeat after you. Practice the Bingo song, being sure to ask, “Why are vowels so smart?”

Reinforcement: Have the children chose their eyes, while you remove one sound card from the pocket chart. Push the cards together so that there are no gaps. Tell the children to open their eyes, and ask, “Who knows what letter sound card is missing? Who can put it back in the right place?”

Let the children take turns removing a sound card and asking the rest of the group, “What’s missing?”