Remove the first consonant from a four-sound word with an initial consonant blend to create a new word.

This game focuses on removing the first sound from a consonant blend at the beginning of a four-sound word in order to make a three-sound word. It is the exact opposite of More Sticky Sounds. 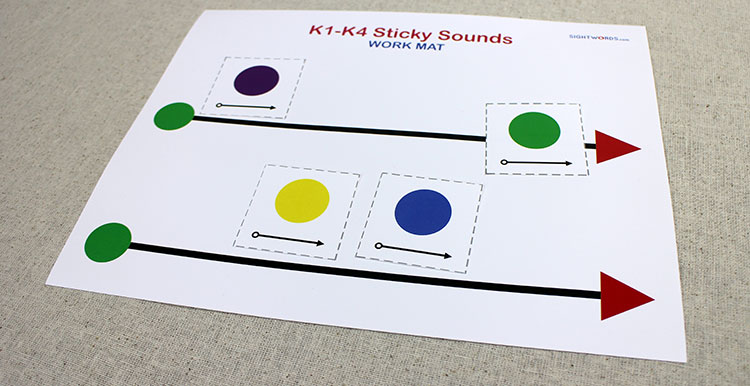 These are the same materials used for Activity K2: More Sticky Sounds.

Start out by explaining the concept of the game to your child.

Put the sound counting markers and the work mat in front of the child. He will use these to count the sounds in the words of this activity.

Adult: Use these markers to show me the sounds in the word I say.
Listen carefully: flip. “I did a flip on the trampoline.”
Say flip. What word?
Child: Flip.
Adult: Yes. Say the sounds in flip,
and put a marker on the mat for each sound you say.
Start here. [Point to green circle on the top arrow.]
Child: /fff/ [places 1st marker] … /lll/ [2nd marker] … /iii/ [3rd marker] … /p/ [4th marker]
Adult: Good job. You placed the sound markers in just the right order
to make the word flip.

Now tell the child how to count the sounds in a second word by putting sound counting markers on the bottom arrow of the work mat.

Adult: I’m going to say another word, and you’re going to count the sounds again.
If you hear a sound that you already used to make the word flip,
move that sound marker down from that word.
What was the first word?
Child: Flip.
Adult: Yes. Here’s my new word. Listen: lip.
“When I pout, I stick out my lip.” What word?
Child: Lip.
Adult: Now say all the sounds in lip and put them in the order that you say them on the mat.
Remember, if you need a sound marker that you already used
for a sound in flip, pick up the marker from the top arrow
and move it to the right place on the bottom arrow.
Child: /lll/ … I used that in flip, so I move this marker down here.
And /iii/ … that was in flip too!
Adult: Did you use the /p-p-p/ marker for one of the sounds in flip?
Child: Yes. So I have to move that marker down to the bottom arrow.
Adult: Good. Now say the sounds in your new word, lip, quickly.
Start here. [Point to green circle on bottom arrow.]
Child: l/i/p.
Adult: What sound in flip did you not use to make lip?
Child: /fff/
Adult: That’s right. /fff/ and /lll/ are sticky sounds in the word flip,
but you pulled them apart and cut off the /fff/ sound
to make the word lip!

Once your child has successfully completed one round of the game, have him remove the sound counting markers from the mat before starting the next round.

One session of this game should last 10-15 minutes, with you and your child covering 6-8 word pairs. Repeat these word pairs several times in random order within the session to give your child lots of practice.

Physically guide your child’s hand through this activity to pattern exactly what he should do. Put your hand over his, leaving his index finger free, and say the sound for each marker as you both move it. Do several rounds of the activity in this way, and then let the child try on his own.

Select a word that the child is already very familiar with from previous sessions of this activity. Say the word very slowly and have him repeat it back to you. Tell him to take away the first sound and try to say the new word. This is the same as the main activity, but the absence of any visual aids (the sound counting markers and work mat) makes it more challenging.

Try to use consonant blends where both consonants are continuant sounds, so that you can stretch them both out if you need to do so. For example: flag without /fff/ becomes lag; or sleep without /sss/ becomes leap. (Remember, spelling doesn’t matter.)

Lesson Objective: Using sound counting markers and a work mat, children will hear a four-sound word with a consonant blend, count and order the the four sounds, and delete the first consonant sound in order to form and orally state a new word.

GELDS (Georgia Early Learning & Development Standards): CLL6.4f (closest standard)
Note: This is much too difficult a skill for most Pre-Kindergarten children.

Place the work mat in the pocket chart or tape it to a wall so that the children can easily see it. Do the activity together, demonstrating how to separate a consonant sound from the beginning of a word to make a shorter word.

Have four children stand in a line facing the teacher, and assign to each child a sound in the starting word (e.g., /sss/, /nnn/, /aaa/, and /p/ for snap). Each child says his sound in order. Then they each repeat their sound faster and faster until they can identify the word. Then have the /sss/ child step aside and the remaining children repeat their sounds (/nnn/, /aaa/, /p/) and identify the new word. Finally, add the deleted sound (the /sss/ child) back, and have the children re-make their original word. Do this multiple times, rotating which child gets to be the first consonant sound.

When the children are ready, give each one a work mat and four sound counting cards. Do the activity together, using the word list for more practice choices. Call on children randomly to repeat your directions to the group as the group follows each step in building the original and the new word. Using the markers and mat, give each child a turn to say and then blend the sounds for both the three-phoneme and the two-phoneme words. Closely monitor each child’s work, and make note of the children who may need extra individual review and practice with this skill.

Reinforcement: Line up four children facing you, standing side by side. Give each child a specific sound to represent. The sounds should correspond to the four phonemes in a given word pair on the word list. Say the word. Have the children repeat your word as a group, and then say the phonemes in order. When a child hears the phoneme he represents, he should take one step forward. Then the group repeats the whole word.

Next, say the shorter word, have the children repeat it, and say the sounds of the new word in order. Again, the child representing each phoneme should take one step forward when he hears “his” sound. Then have the whole group say the new word. There will be one child (the one representing the initial consonant phoneme) who didn’t step forward. Have that child say his phoneme. Then you help the group summarize what happened — what sound was cut off the original word and where it was cut off that word to make the new word. This activity reinforces both what consonant sound was cut off and the location where that sound appeared in the original word.