If you skipped Module I, complete it before beginning this Module. See Fast Track for more details.

This game focuses on adding a sound to the beginning of a two-sound word to make a three-sound word with a consonant blend. 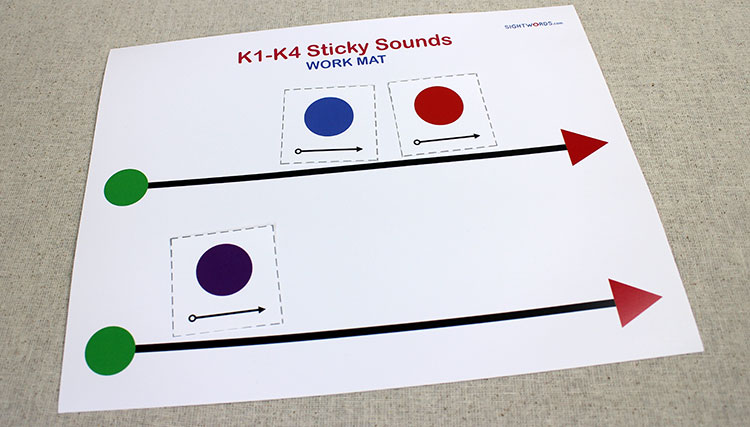 Video: How to play Sticky Sounds

Start out by explaining the concept of the game to your child.

Put the sound counting markers and the work mat in front of the child. She will use these to count the sounds in the words of this activity.

Adult: Use these markers to show me the sounds in the word I say.
Listen carefully: low. “The man spoke in a low voice.”
Say low. What word?
Child: Low.
Adult: Yes. Say the sounds in low,
and put a marker on the mat for each sound you say.
Start here. [Point to the green circle on the top arrow.]
Child: /lll/ [places 1st marker]… /ōōō/ [places 2nd marker]
Adult: Good job. You placed the two sound markers in just the right order to make the word low.

Now tell the child how to count the sounds in a second word by putting sound counting markers on the second arrow of the work mat.

Adult: I’m going to say another word, and you’re going to count the sounds again.
If you hear a sound that you already used to make the word low,
move that sound marker down from the top line to the bottom line.
What was the first word?
Child: Low.
Adult: Yes. Here’s my new word. Listen: slow.
“Snails are very slow animals.” What word?
Child: Slow.
Adult: Do you hear a new sound in slow that you don’t hear in low?
Listen: ssslllōōō • • lllōōō. Again: ssslllōōō • • lllōōō.
Child: Yes, there’s a /sss/ sound!
Adult: Is it at the beginning or the end of slow?
Say slow and tell me where you hear the /sss/ sound.
Child: Slow … at the beginning!
Adult: Put a marker for /sss/ at the start of the bottom line on the mat.
Now say all the sounds in slow and put them in order
on the mat. Remember, if you need a sound marker that you already used
for a sound in low, pick up the marker from the top line
and move it to the right place on the bottom line.
Child: /lll/ … I used that in low, so I move this marker down here next to /sss/.
Adult: Okay. What sound markers do you have so far for slow?
Child: This one is /sss/, and this one is /lll/.
Adult: What sound do you still need to make slow? Say the word and figure it out.
Child: sss-lll-ōōō … I need /ōōō/!
Adult: Did you use the /ōōō/ marker for one of the sounds in low?
Child: Yes. So I have to move that marker down to the bottom line.
Adult: Good. Now say the sounds in your new word, quickly.
See if two of the sounds stick together when you say the word fast.
Child: Slow. Slow. Yes!
Adult: Which two sounds stick together when you say slow? Ssslll • • ōōō.
Child: /sss/ and /lll/

Explain that when /sss/ and /lll/ are next to each other in a word, they are “sticky sounds.” They are almost glued together, they are so sticky!

Once your child has successfully completed one round of the game, have her remove the sound counting markers from the mat before starting the next round.

One session of this game should last 10-15 minutes, with you and your child covering 6-8 word pairs. Repeat these word pairs several times in random order within the session to give your child lots of practice. Be sure she has a good understanding of the use of two “sticky” consonant sounds to make a new word.

Reduce the number of word pairs in a session, and repeat them randomly three or four times.

Lesson Objective: Using markers and a work mat as visual aids, children will hear a two-phoneme (CV) word, use markers to count and order its phonemes, add a consonant phoneme to the beginning of the word, and blend the three phonemes together orally to create a new word with a consonant blend.

You may need to cut the mat into two parts. Leave one row open under each section of the mat for the sound counting cards. Place the work mat in the pocket chart or tape it to a wall so that the children can easily see it. Do the activity together, demonstrating how to “stick” a consonant sound to the beginning of a word to make a longer word. Be sure to keep the phoneme markers in their correct order. Say the sounds together and move the sound counting markers in their correct order to make a new word. This will take many rounds of practice.

When the children are ready, give each one a work mat and three sound counting cards. Do the activity together, using the word list for more practice choices. Call on children randomly to repeat your directions to the group as the group follows each step in building the original and the new word. Using the markers and mat, give each child a turn to say and then blend the sounds for both the two-phoneme and the three-phoneme words. Make note of the children who may need extra individual review and practice with this skill.

Reinforcement: Replay the game. Give each child a different word to try. Have the group confirm or correct each child’s work. Check for understanding. This activity is challenging for many children because the consonant blends are hard to hear as separate sounds.