Help Chunky the Sound Hound “eat” sounds in the inside of words to make new words. Develop your child’s awareness that removing an internal consonant immediately after the initial sound of a consonant blend can create a new word.

This activity is the reverse of Sound Store and focuses on analysis of consonant blends instead of synthesis.

NOTE: Hearing, isolating and manipulating the internal (second) consonant of an initial consonant blend is extremely hard for many children — especially before they are seven years old. So we recommend playing this game with just one to three word pairs in a session. Spend the rest of your lesson time playing games in the next module, Beginning Reading. 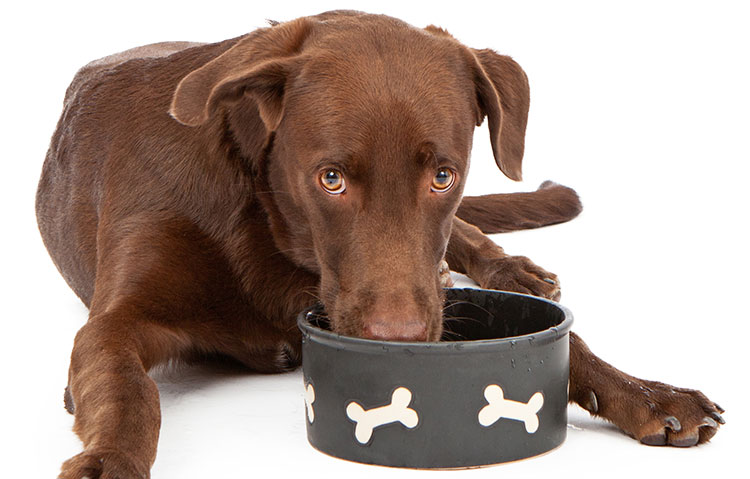 Video: How to play Sound Hound

Remind your child about Chunky the Sound Hound, the dog who only eats certain sounds from the inside of words:

Adult: Do you remember what we learned about Chunky the Sound Hound?
We learned that he’s a very picky eater.
He only eats sounds inside words. And he only likes
certain sounds. As I say each sound that Chunky likes, you point to
the picture of that sound around Chunky’s food bowl. The sounds
Chunky likes to eat are /k-k-k/, /lll/, /nnn/, /rrr/, and /t-t-t/.

Put Chunky’s food bowl, the work mat, and the green and red sound counting markers in front of the child. Now you’re ready to explain the game:

Adult: In the Sound Store you bought a lot of sounds to put into words
for Chunky the Sound Hound. These yellow sound markers are the sounds
you bought. Let’s use our markers to make one of the words you made
at the Sound Store. Then we’ll see if you can find a sound in it
to feed to Chunky. What are the sounds Chunky likes to eat?
Look at his food bowl.
Child: /k/, /lll/, /nnn/, /rrr/, and /t/.

Now you are ready to lead your child through the playing of the game.

Adult: I will say a word, and you use the sound markers to show
the sounds in my word. Get ready: blow.
“Blow out the candle.” What word?
Child: Blow.
Adult: Say the sounds you hear in blow as you make the word. Start here
[point to green circle on arrow] with your green marker.
Child: /b-b-b/ [places green marker] … /lll/ [yellow marker] … /ōōō/ [red marker].
Adult: Good. Touch under the markers and say the sounds fast. What word?
Child: /b/-/lll/-/ōōō/. Blow.
Adult: Look around Chunky’s food bowl, and say the sound for each letter you see there.
Child: /k/, /lll/, /nnn/, /rrr/, and /t/.
Adult: Do you hear any of those sounds inside the word blow?
Touch each of your sound markers and say the sounds in blow.
Child: /b/-/lll/- yes, there’s a /lll/ sound!
Adult: But is it inside the word blow? Remember, the sound has to
be inside a word for Chunky to eat it.
Child: Yes.
Adult: Okay. Take the /lll/ yellow sound marker and put it in Chunky’s food bowl!
Child: [moves correct sound marker]
Adult: Now you have a hole between the two other sound markers. Move the
last one so it’s next to the first one. Can you tell me
what new word you have? Say the sounds slowly and then fast.
Child: /b/ • • /ōōō/. Bow!
Adult: Good job! Let’s try another word, so Chunky can have another sound to eat!

Once your child has successfully completed one round of the game, have her remove the sound counting markers from the mat and bowl before starting the next round.

NOTE: This activity can be very difficult for young children, so you will go through just one to three word pairs in a session.

Have the child substitute consonant sound cards (with letters) for the sound counting markers she is using for consonants. Do not use the vowel sound cards, as this can create confusing “spellings.”

Lesson Objective: Using sound markers and a work mat, children will hear, isolate, and delete the internal consonant sound of a consonant blend in a spoken three-phoneme word in order to produce a two-phoneme word.

Georgia Standards of Excellence: ELAGSEKRF2.e
Most Kindergarteners will find this skill very challenging.

Play the game together. Demonstrate taking a sound marker away to make a new word. Have children take turns performing specific steps of the game. For example, one child repeats the first word. Another repeats the second word. The group decides what sound to remove. Another child decides where to remove the specified sound and pushes the remaining markers together. In unison, the group says the remaining sounds in order and blends them into the new word.

Provide many opportunities to practice, using only a couple of words per session.

Reinforcement: Play the game again. If the children are ready, let them answer individually. Challenge children to use the new word in a sentence. For example:

Adult: Make a sentence about Chunky with your new word: bow.
Child: Chunky can wear a bow on his head!

Use only one word pair and repeat it, increasing the pace, to be sure each child is firm in his understanding of the activity.