IMPORTANT! If you omit teaching this lesson, be sure to teach the Reinforcement Song described in Activity 3 below.

Start with Part B of Activity H2. See Fast Track for more details.

Identify and practice listening to the ending sound in one-syllable words, focusing on one sound (phoneme) at a time. It is more difficult for a child to hear and notice ending sounds than beginning sounds.

This is a simple identification activity, but your child will not be bored if you move at a fairly fast pace. 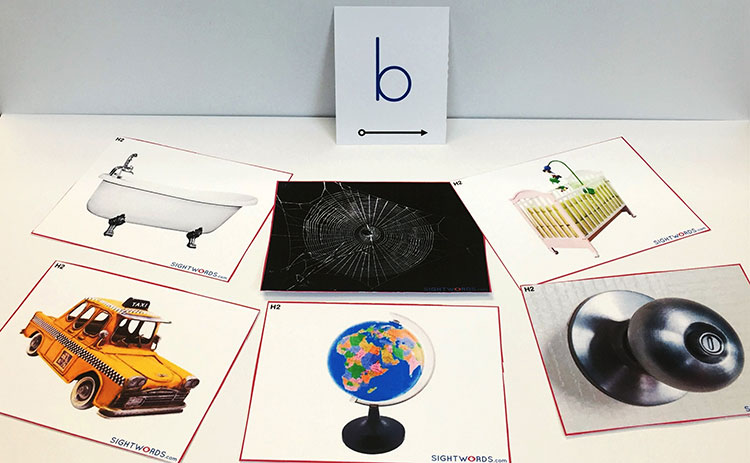 Print out the picture cards and sound cards, preferably on sturdy card-stock paper, and cut them apart. The word index is for the adult’s reference only.

You will want to prop up the sound card for each round so that the child is looking straight at it. Lean it against a block so that it is angled appropriately.

NOTE: Remember how we describe the lower-case letters on the sound cards: “This is what this sound looks like when we write it out.”

Select an ending sound (for example, /vvv/) and put out the appropriate sound card. Find the six picture cards that go with that ending sound.

Now go through each picture card with your child, emphasizing the ending sound in each word and pointing out the connection to the sound card.

Adult: [pointing to sound card] This is what the /vvv/ sound looks like when we write it.
What’s the sound?
Child: /vvv/
Adult: That’s right. Here’s a picture that ends with /vvv/: glove.
Say glove.
Child: Glove!
Adult: Again: glovvve. You say it.
Child: Glovvve.
Adult: What sound is at the end? Listen: glovvve.
Child: V.
Adult: That’s the name of the letter. I need the sound.
Child: /vvv/
Adult: Good job.

Go through the other cards with pictures that end with the /vvv/ sound, repeating the steps above. Each session of this activity should cover two new letter sounds. After the first session, you will also review the two previously learned ending sounds.

NOTE: When pointing to a sound card, make sure your fingertip is below the letter, so the child can see the entire letter.

Repeat and reinforce these ending sounds with your child as much as possible. One way is to use the nursery rhyme/song “Mary Had a Little Lamb.” Insert a trio of words from this activity’s word list that have the same ending sound. For example:

Once the child understands how the song works, encourage him to sing along with you. Sing this song frequently, with different ending sounds, throughout the lessons that follow H1. This song provides review and practice with previously learned ending sounds while the child moves forward and learns new ending sounds. Once learned, these and future songs about phonemes can and should be reviewed at random times such as transition times, riding in the car, bath time, etc.

You will do this activity with your child several times in order to familiarize the child with all the different consonant ending sounds and their corresponding letters. Introduce two new letter sounds a day, according to the schedule in the table below.

Once your child has a good grasp of four of the ending sounds, use those sound cards and picture cards in Sound Sort. Use this first batch of sounds in that game while continuing to go through the other sounds in this game.

As you go through your other daily activities, encourage your child to think of other words or names that begin with a particular phoneme (sound). For example, play I Spy (“I spy…something that starts with /nnn/”).

Lesson Objective: Using pictures and a consonant letter card as visual aids, children will identify and say the ending phoneme of a variety of pictured items, all with the same final phoneme.

Warm up for the activity by asking, “What does it mean to be last? What does being at the ‘end’ mean?” Tell the children to line up, and ask, “Who is last in the line? Who is at the end?”

Place the letter sound card you have chosen where everyone can see it. Select the corresponding picture cards and have the children name the pictures after you, emphasizing the ending sound. When the children grasp the skill, try adding the singing part of the lesson, inserting a trio of words from the word list. Sing a trio of words from the word list to each child. Encourage them to respond to the tune of “Mary Had a Little Lamb.” Sing along with the child if she needs help.

Reinforcement: Use the song often at transition times and as children walk in groups to the restroom, carpool line, etc. It is important that children frequently review and practice the beginning and ending consonant sounds in spoken words as they advance to later lessons in the curriculum.