Play a variation on the game of Memory or Concentration, matching picture cards to their ending sounds. 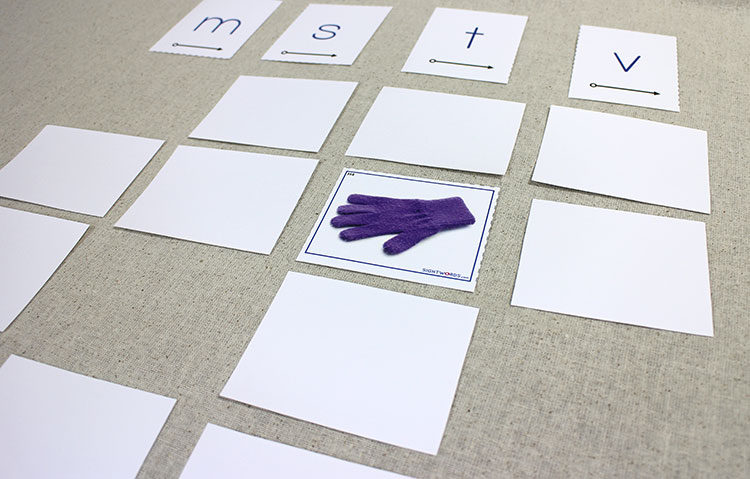 Print out the picture cards and sound cards, preferably on sturdy card-stock paper, and cut them apart. The word lists (on the center cards) are for the adult’s reference only.

Video: How to play Make a Match

Select the four ending sounds you will cover in the game. Have your child identify the four sound cards by saying each one’s sound. Go through the corresponding picture cards with your child to be sure he knows the correct word for each picture. Then shuffle the picture cards and put them face-down in a 4-by-4 grid. Take the four sound cards and put them face-up in a row at the top of the grid.

To start the game, tell your child to pick one of the sound cards, point to it, and say its sound. Then have him select a picture card, turn it over, and say the name of the picture.

Adult: Okay, point to one of the sound cards.
Which sound did you pick?
Child: /mmm/
Adult: Good. Now pick a picture card and turn it over.
What is that a picture of?
Child: Glove!
Adult: Does glove end with /mmm/?
Child: No.
Adult: So turn the glove back over.
Let’s try again. Pick a sound card.
Child: That one — /sss/.
Adult: Okay. Now turn over one of the picture cards.
Child: It’s a dress!
Adult: Does dress end with /sss/?
Child: Yes!
Adult: Good job. Put the dress card to the side,
and let’s find another match!

Continue the game until all the cards have been matched to their ending sounds.

You will do this activity with your child several times to give him practice with all the ending sounds and their corresponding letters. Here is a schedule to show you the order in which to cover each of the ending sounds.

If the child struggles with four different ending sounds, use just three or even two ending sounds in a game.

You can simplify the game by having a child turn over a picture card and match it to one of the displayed ending consonant sound cards. This will also speed up the game.

Once the child has a firm grasp of this activity, he can complete the game independently.

Lesson Objective: Children will identify the phonemes of four consonant letter cards and find pictures whose ending sound matches the phoneme of each selected letter.

Review the sound of each letter sound card. Lay the cards in a grid on a table or tray. The children will take turns choosing a letter sound card and then turning over a picture card. Have the child say the name of the picture. Until they get the hang of the game, prompt them with questions: “Does the ending sound of this picture match the ending sound card you chose?” If you place the grid on a tray, simply slide the tray to each child in turn.

Reinforcement: The tray can be set in a center for independent practice. Children can play the game as partners. One child chooses the letter sound card, and his partner selects a picture card that she hopes has a matching ending sound. If there is time, change roles and play again.