Complete all of the sentence activities in this module: C1 through C6. Then skip Activity C7 and try Activity C8. See Fast Track for more details.

Use colored paper squares to discuss how sentences are made up of individual words, introducing your child to a deeper awareness and understanding of the structure of sentences. 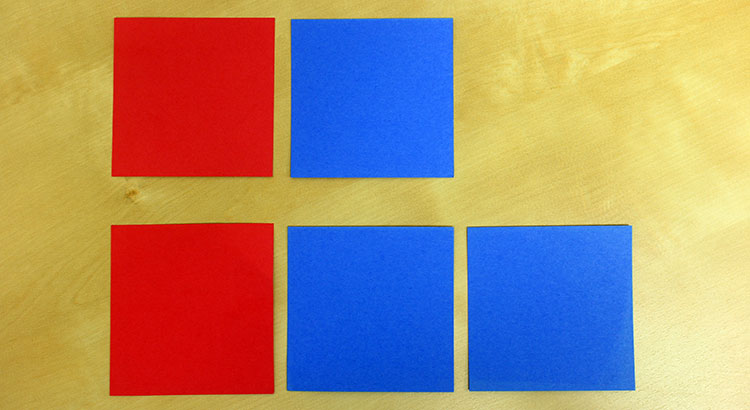 For this activity you will need two stacks of colored paper squares (for example, one stack of red squares and one stack of blue squares). A good size is 2 inches by 2 inches.

It is also helpful to have a prepared list of simple two-word and three-word sentences. The words should all be one-syllable words. Here are a few examples:

Video: How to play Introducing Words

For the next round, have the child compare sentences made of totally different words, such as “Sam plays” and “Ann drinks milk.” Remove the squares you laid out for “Sam plays ball,” and put down three new squares (one red and two blue) as you say the words “Ann drinks milk.”

Repeat this with at least five more sentences in a session. Mix it up so that sometimes the shorter sentence is first and sometimes the longer sentences is first. Review and practice this activity frequently in the upcoming days and weeks, until your child masters this new concept. It is a critical piece in building a child’s understanding of the structure of language.

NOTE: Point out the spaces between the word cards. Explain that when you write words, you leave a little space to show where one word ends and the next one begins.

NOTE: DO NOT write any words on the paper squares! This exercise is about learning to hear the individual words in a sentence. We are still a long way from reading!

Speak a sentence clearly, but without showing the corresponding paper squares. Ask the child to tell you how many words are in the sentence before you display the squares.

Have the child give you a sentence verbally. Then have him place the corresponding paper square down to represent each word of his spoken sentence. Be sure that he leaves space between the squares.

Lesson Objective: Using paper squares as visual aids, children will count the number of words in short, spoken sentences and compare the lengths of sentence pairs.

Practice as a group. Say a sentence from the 2-3 word sentence list above. Give the children these instructions: “Take a red square from your stack and put it down in front of you when you hear the who it’s about part of the sentence. Put a blue square in front of you for each word you hear that tells you what’s happening in the sentence.” Call on different children to repeat the sentence and place the squares representing the words in that sentence.

Using a box top or small tray for each child, have the children work as teams of two to “build” two spoken sentences and compare their lengths. Remind children to line up their rows of words for each sentence neatly, with just a little space between each piece of paper.

Reinforcement: Read a sentence to each child in the group, and follow the directions above. The other children can give a thumbs-up sign if they agree with the child’s answer.

Use a work surface (paper, box top, etc.) with pre-lined areas in which children can place their colored paper squares for each sentence if they need help keeping their squares neat and in order.